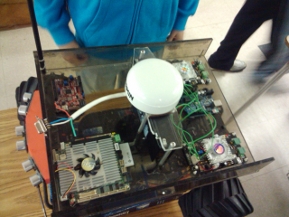 This year we decided to do most of our RoboMagellan programming in Python on the grounds that programmer productivity is a bigger issue than program performance given what we’re doing.
An interesting side effect of this, and one we didn’t really anticipate, is that doing things this way has made our robot construction better. Last year we used Arduinos exclusively which meant that we needed the robot to test the software during development. This lead to temporary construction decisions (“let’s just zip-tie the board here for now so we can test”) becoming more or less permanent (“let’s leave it, we know it works”).
With Python it’s much easier to develop and test the code without going near the physical device. This has given us the time to pay more attention to the quality of the hardware build. That build is nearly done. The software is nearly done. It will come together in the next couple of weeks and we’ll be moving into the test phase.