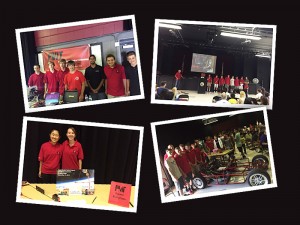 Electric Car – A complete overhaul of the car to be more efficient and reliable. Close to ready for its first test drive with this new work.

First Robotics – Has a GREAT group of mentors, a dedicated teacher mentor (Thank you, Mr. Brown) and a strong start toward this season which starts on Jan 9!

Robomagellan – April 2015, placed 2nd in Robogames (for the second or third time). Working on lots of programming for this year’s competition.

Rocketry – new team formed with a great start on launches

Solar Cup – Secured a sponsorship for the 2016 competition. Great teamwork to build the boat and ready to wire it up.

UAV – Two strong teams with 3-4 aerial vehicles running or in the works. Will have an internal competition in the Spring that may expand to a South Bay competition!

Video Game Group – Have game designs and will compete in a programming competition in the Spring.

BattleBots – New group formed by experienced Seniors. Won’t get on TV this year, but maybe paving the way for a TV appearance in the future.