The Unmanned Aerial Vehicle (UAV) project was started in 2012 to compete in the International Aerial Robotics Competition (IARC). It is intended to be a multi-year enterprise at Palos Verdes High School. As a group students will explore and design cutting edge UAV technology with a culture of mentorship between upperclassmen and underclassmen. The UAV project will be dedicated to mastering aspects of the UAV challenge such as automation, computer vision, systems engineering, and sensor data crunching. The UAV team will compete as the only high school team in the IARC against universities such as, Northwestern, Georgia Tech, University of Michigan, and University of Southern California. Previous winners of the IARC competition include Massachusetts Institute of Technology and Georgia Tech. 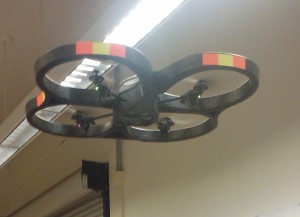 The competition takes place during the summer in Grand Forks, North Dakota. Students who participate spend hours working to achieve the goal of going to this competition and competing against colleges that they may be attending in the future. With the hours of work put into the project, students gain an invaluable friendship with their teammates and knowledge beyond any that could be received in a classroom.